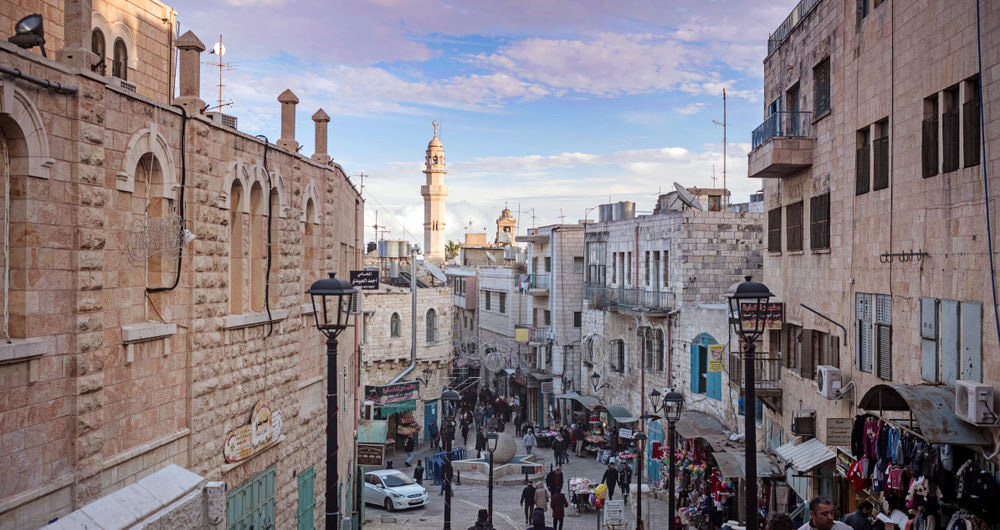 A visit to Bethlehem is really incomplete without delving into the city’s history and taking a walk through some of the many winding and picturesque old-city streets and staircases. The Church of the Nativity and Manger Square, though understandably major points of attraction for any visitor, are only the tip of the iceberg. A look at Bethlehem’s old quarters is an enlightening way to see this quintessential Palestinian city, as each of the various historical quarters is a beautiful antiquity in its own right.

Follow Bethlehem’s meandering Star Street to walk the traditional route of pilgrimage to Jesus’ birthplace, trodden for thousands of years. During the Christmas season, this lovely street is decked with lights and draped with garlands, making it festive and heightening the significance of its ancient appeal. Deep in the old city, one can find hints of the namesakes and defining characteristics associated with each of the seven quarters, such as the Tarajmeh (Translators) Quarter and the Qawawseh Quarter – characterized by Arab Christians who play a part in Bethlehem’s Christmas Eve celebrations. Other quarters, such as Al-Najajreh and Al-Farahiyeh, draw their names from long-established families who shaped the culture and influenced the creation of their respective quarters. The Syrian Orthodox Quarter (An unofficial eighth quarter).

In Manara (Lighthouse) Square, just beyond the central Manger Square, lies a congregation of stands whose owners sell Arab pastries, clothing, and nuts; and in an alleyway, a man named Sami sells his special tea, a local favorite. This square, where the city’s first electric light was installed in the early twentieth century, acted as a meeting place and beacon for nighttime activities when little else was illuminated. Beyond, along Pope Paul VI Street, the Green Market awaits. A vibrant souq packed with colorful fruit, falafel stands, and pyramids of spices, it makes for a delightful visual. In these narrow neighborhoods, astounding architecture and everyday Palestinian life is revealed at every turn.

There is much to see along Al-Najajreh Street, starting just off Manger Square and wandering away toward the souq. There are many kinds of pickles to buy, dates and herbs to sample, and cats to be seen peeking out of side alleys. Bethlehem’s Olive Press Museum can be found here, housed in a restored building, and allowing easy exploration of the process of olive oil production and its importance in Palestinian culture. Here one can also see where locals buy qidra (A traditional meat and rice dish cooked in a clay pot) for their wedding ceremonies.

A deeper understanding of the genuine Bethlehem, a thriving and multi-faceted city, begins the process of untangling its history that spans thousands of years. This helps to navigate politically sensitive or confusing topics related to the region and its political situation. What at first feels labyrinthine and potentially convoluted starts to become familiar and friendly as the visitor is spatially oriented with the help of accommodating residents and well-marked signage. There is undoubtedly no better way to see Bethlehem than through the lens of its historical significance and beautiful local culture. Taking the time to explore its old quarters, a must for any visitor, provides the perfect lens.